Autumn Wonders 1: Identifying Common Trees in Autumn by their Colors

I was 10 miles into a 16 mile run on the rail trail.  The yellows of Ash, deep browns of Oak, and deep reds of Red Maple surrounded me, cradling me as I ran.  The wind brushing against the pores on my face – do the leaves feel something like that on the small holes on their undersides that only microscope can show?  I decided to close my eyes while I was running and open them very quickly to see if I could identify trees around me in a split second.  I ran, closed them, and opened them quickly…

What do the Colors of Autumn Reveal about our Relationship to Plants?

It is not accurate to say that trees lose their leaves in Autumn to store their energy.  Storing energy is an adaptive side-effect of a much more dramatic process.  In deciduous plants, if trees didn’t loose their leaves, they would die – why?  Because of light.  Yes, because of light! 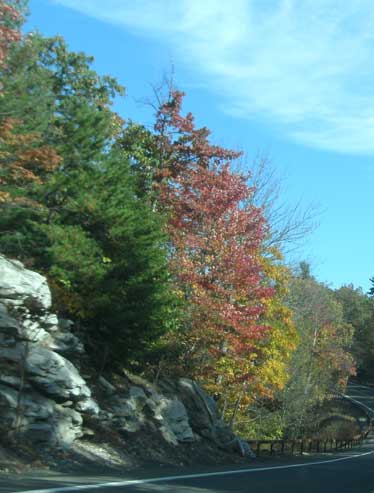 In Nature and the evolution of life, light originally was the ultimate anti-septic and most organisms have sought to protect themselves from its damaging effects while still harnessing its energy.

In Autumn, for deciduous plants, temperatures drop too low for most of the plant enzymes that are involved in photosynthesis to function effectively, if their leaves didn’t drop, free radicals would form everywhere and the plant would effectively die from light-induced disease.   Most of the colors we see in autumn act as anti-oxidants the plant uses to defend itself from free radical damage to its antennae proteins which act like nano-solar cells.  This is also why eating colorful plants protects us from cancer and genetic damage – because plants must protect themselves from the same threats from the sun. 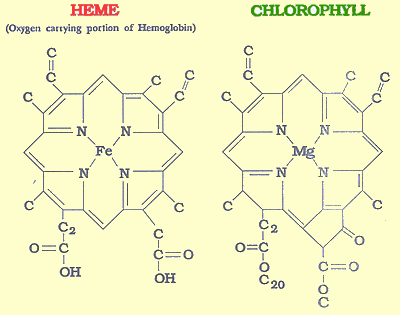 An Incredible Chemical Kinship with Plants: Some of the colors we see may be breakdown products of chlorophyll, one being a red pigment that is a chemical cousin to hemoglobin – a chemical that makes our blood look red. (Image from: science2be.wordpress.com)

One important function of the colors on these trees is to act as chemical protectants for the “solar panels” of the plant cells.  In sunlight they get damaged, but these colorful compounds attract the light and take the beating for the solar panels in the cell, so they can remain in tact.  When these colorful compounds are removed from leaves, the plant dies within hours.   That’s how important they are.

However, the story is more interesting than this.  There exist colorless versions of the same colored compounds that are more effective anti-oxidants than the colored ones.  So why doesn’t the plant just produce those? – perhaps there is something to the color itself that is important.  As with everything in Nature, the answer is complex, and currently, the answers are unclear.  Do you have any hypotheses about this?

What is seen in a flash…

I ran, and each 20 seconds or so, I’d open my eyes, this time for 2 seconds, then for 1 second, then for a millisecond.   I tried to create a strong mental picture of everything I saw, the colors of the autumn leaves strong in my awareness, and then I’d open my eyes and as I ran towards the trees I’d check to see if I was accurate.

In the first hour or so my results were less than satisfying – I typically got them all wrong.  But I persisted, for 5 miles, until after almost an hour of “training” I had almost 100% accuracy with every single leafed tree in my field of vision!  I was amazed at how much we could take in in a fraction of a second once my mind was “primed” for that information.  I would need to practice probably for hours to get back to this speed, though it helps me to remember that at one time I did do it.

I walked the last mile in awe of our ancestors, of the old scouts, who it is fabled could know what was happening miles away based on what the birds were doing.  With this autumn sight, locked in my brain, in only a millisecond, I believe wholeheartedly that these stories are real, and that our connection to Nature must extend far beyond what I think is possible.

Thomas has studied primitive skills and nature awareness with great naturalists such as Tom Brown Jr., Dan Gardoqui, Dan Hansche, and George Leoniak. He is a Level 1 Track & Sign interpreter through Cybertracker International – the most rigorous tracking certification in the world. Thomas completed the White Pine nine-month tracking apprenticeship, attended a weeklong bird language intensive, and served as a seasonal naturalist at Mohonk Preserve for two years. More about Thomas's work.