Gratitude for Connections to History 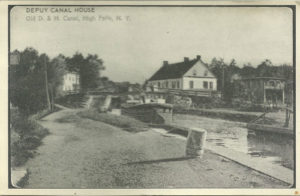 Around the winter solstice I always feel, as many people do, that the veil between our world and the worlds our various ancestors inhabited becomes especially thin. I’m thankful for the way their stories are written on the landscape and in our architecture, and are embedded in our language and place names. I’m thankful for the windows into the past that surround me, especially here in New England where the tracks left by the colonists and the hard workers of the industrial revolution are so tangible. In my backyard these tracks are rather dramatic, taking the form of a once 108 mile long, and still 15′ deep and 15′ wide trench, made of Shawangunk conglomerate.

I’m thankful for the time-traveling that I do because of the canal – for the feeling of reaching out to touch these ancestors.

I recently moved to High Falls near the Canal Walk. For those of you not familiar with them, the canals were constructed in 1847 to transport anthracite coal from Honesdale, Pennsylvania all the way to the Rondout Creek near Kingston. From there, the coal journeyed onward via the Hudson to heat New York City. My imagination cannot even approach an adequate rendering of the construction process – a feat powered by people with pick axes, shovels, draft animals and explosives. “It took 2,500 men and 200 teams of horses just to complete the section of the Delaware & Hudson between Cuddebackville and Kingston,” reported HV magazine in 2010. The entire construction process of the canal took only three years. I doubt I will ever work as hard in my life as the people who built it did.

I’m thankful for the time-traveling that I do because of the canal – for the feeling of reaching out to touch these ancestors. Today when I walk beside the locks, I imagine the families that tended them waking at 4am to harness towing mules, monitoring the water levels, and exchanging news with those accompanying their boats to the city.

In these moments of imagining I have a sensation of living in a geography of time – of dwelling within a visible moment of some much larger, invisible fabric. This sensation awakens a landslide of curiosities – what was daily life really like in the 1850s? What did the momentum of the industrial revolution feel like? Were people proud and excited – or frightened by the rapid change? Who were these ancestors – what were the tiny personal moments and experiences that shaped their ideologies? How much did they know about their own ancestors and their journeys across the ocean? In the early 1900s when the railroads had solidly taken off and many sections of the canal were filled in, were there people who were knowingly reversing their grandparents’ work? What did that feel like?

In these moments of imagining I have a sensation of living in a geography of time – of dwelling within a visible moment of some much larger, invisible fabric. This sensation awakens a landslide of curiosities…

And what did these canal builders know of the Lenape, the indigenous people whose homeland encompassed the entire route of the canal? Most of the Lenape had been pushed out of their lands (which may have been called Lenapehoking, meaning land of the Lenape, or Scheyischbi, meaning land bordering the ocean) by the settlers and by smallpox throughout the 1700s, so surely at least the grandparents of some of these canal builders had met or even known or fought Lenape people.

I’m thankful for the canal because it confronts me with the arresting volume of what I don’t know about my home. It makes tangible the continuum that I’m a part of and inspires me to learn. Most of all I’m thankful for the canal exposing the fallacy that I sometimes believe – that the history has been lost and that I can’t find out. If this little section of the canal is still here, and if Towpath Road is still named for it, and if Manhattan is a word from the Munsee dialect of Lenape, meaning “where one gathers bows”, then I can certainly do the work to learn what stories can be found of this place that I’m so fortunate to live in, stories that my ancestors lived, stories they knew, and stories they may or may not have cared to try to learn.

This year I got married and moved to a sweet little place that our dear friends have purchased and live in with us and have given us the freedom to make our own. I am overwhelmingly thankful for so many things, especially for the feeling that, for the first time since my childhood, I live in a home. I’m equally thankful for the task of learning the narrative of this place intimately, so that one day I might love this home properly.

Mai grew up in southwestern CT, where she spent her days clamoring across barnacled boulders lining Long Island Sound, and capturing crickets to feed to her leopard frogs. She studied acting at Emerson College and graduated from Hampshire College with a self-designed B.A. in ecosystem mimicry agriculture and community circus theater. Alisha Mai has run nature-immersion programming since 2008, with Vermont Wilderness School, the Institute for Natural Learning, Wolftree Programs, White Pine Programs, and most recently, Wild Earth. Mai enjoys working with girls and teens, and incorporating physical play into her programs. She draws upon her background in theater and circus to create zany and magical experiences in nature. Alisha Mai is certified in Wildlife Track and Sign (Level II) through CyberTracker, and is a Wilderness First Responder. She teaches vinyasa yoga and aerial silks, and studies at Circus Warehouse in Queens. More about Alisha Mai's work.