Why High School Teens Spent Two-Nights Sleeping Outside In January

With the windchill, the temperatures were in the negatives at night and not much warmer during the days! But we didn’t hear a single complaint about the weather all weekend!

Here’s a little re-cap from our two-night January overnight at the Ropes: Wilderness Program for High School Teens:

The dark of night had already settled in, as we began to set up our camp on Friday.

With the added challenges of our food and water freezing for the weekend, there was plenty of strategic planning for the crew to undertake. We split up into groups, some set up the kitchen area, while others gathered or chopped fire wood, and the rest helped set up tarps over a longhouse structure.

Earlier in the year, the boys in the Atlatl program had created a frame to a long house structure. After securing tarps over it, this became our shelter for the weekend. We even had a chiminea stove in the center, which helped us warm up the structure by a few degrees. (Be sure to check out the photo below!) 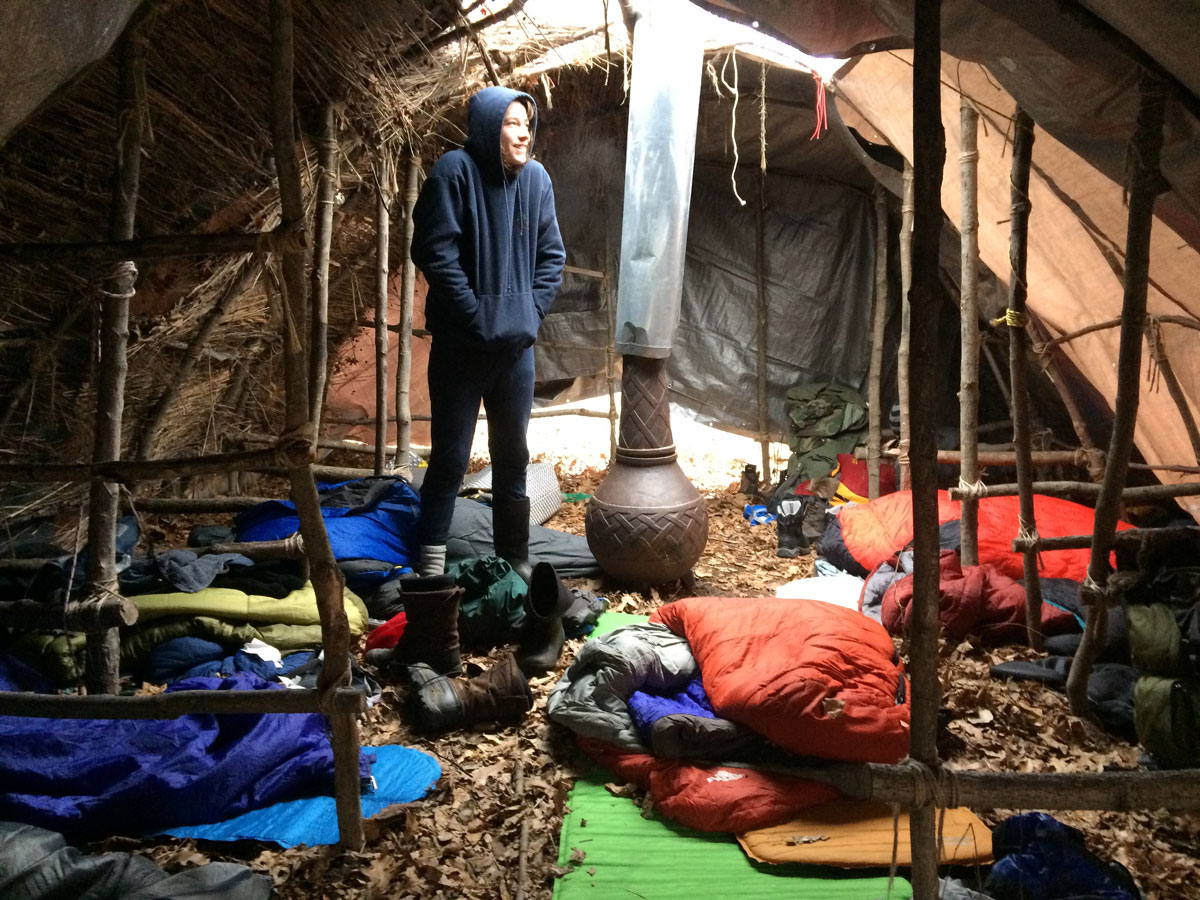 When the work was finished, and after a warm meal, the teens split into two groups for an intensified version of 24-Hour Capture The Flag.

The night was cold, but spirits were high. And though some experiences are hard to encapsulate through words, the teens all found their unique place in the game, faced their challenges, and had a great time. Bonus points were awarded to either team that kept their fire lit until sunrise. It was a bit surprising to see the majority of the teens going full force with this challenge, tending their fires until dawn!!

With the morning upon us, slumber called! And our Saturday was off to a nice slow start = )

With the cold, and a bit of lingering sleepiness, we moved with a touch of slowness through the rest of the weekend. Getting a chance to make some coal burned bowls and exploring the land/river in the daylight was a treat! And we were lucky enough to witness the teens create some of the best freestyle music jams we’ve ever heard!!

Our last night was filled with cooking dinner together around the fire, before curling up in our longhouse for an early nights rest.

It was no easy task, and I know everyone out there was facing their own challenge. Ultimately, it was through the challenge, that we were able to recognize our own strength!

With warmth on the cold nights,
Stephanie, Michaela, and Jonathan

Big thanks to the Maya Gold Foundation for supporting this program and helping to bring teens into the woods for character building adventures!

Wild Earth, Staff & Board of Directors

Wild Earth joins inspired leaders in offering multi-generational programs and events that strengthen connections with ourselves, others, and the Earth while building ecological, social and cultural resilience. Located along the Shawangunk Ridge in New York’s Hudson Valley, Wild Earth is a not-for-profit that runs nature-based programs for children, teens, families and adults. More about Wild's work.