Home » Blog » How to build an Igloo, survive a blizzard, finish your mission on time

How to build an Igloo, survive a blizzard, finish your mission on time

I’m going to assume we all lead busy lives and we’ve all found ourselves in a situation where we have a list of targets, goals, errands (whatever you call them) as long as our arm, when out of nowhere the region gets hit by a snowstorm like your grandparents told you stories about. Except back in their day, the school they had to walk to (which was mysteriously located at the top and bottom of a hill) didn’t have snow days.

Whatever plans you had have been suddenly canceled and now you’re stuck on the edge of a dangerous mountain twenty-thousand klicks from the nearest yak-skin yurt, or indoors watching spy movies or whatever.

We’ve all been there and knowing that your plans have suddenly changed can be quite alarming, but the important thing to remember is DO NOT PANIC. You’re a human being with a big brain packed full of ingenuity just waiting to explode out like a fake snake in a fake can of peanuts.

But that big brain is also your biggest weakness because brains need four things to function normally: oxygen, carbohydrates, proper temperature and intracranial pressure. A snowstorm presents a threat to our core temperature and we’re going to need to build a shelter to keep that 3 pound fake-can-of-peanuts healthy.

Maybe this is your first time on the side of a dangerous mountain faced with the choice of survive or die, or maybe it’s your first time indoors with time to watch The Thin Red Line or North by Northwest. I’m here to tell you that in both situations choose to live. Here’s how. 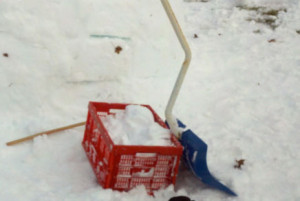 This is a great first step in any situation. In mine I took a look around, saw what I had at my disposal and made a list:
1) Tactical thermal insulation suit
2) Shovel
3) Yard stick (0.9144 meters long)
4) Rectangular plastic crate (mine’s collapsible for easy storage between missions)
5) Snow (every good operative knows that the problem is the solution)

Since I already established that I needed a shelter, the plan is to build a shelter out of the collapsible crate.

Step 2a: Revise plan when necessary

I didn’t fit inside the crate. Will try making shelter out of the snow. 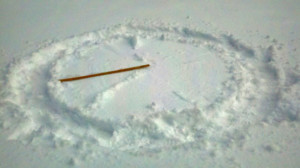 Every shelter is built on a foundation… except for a houseboat… or a tree house. Use the yardstick to measure out a circle 6 feet in diameter. Then walk around and around stomping down the snow until it’s firm and level.

By this time you’re probably overheating so unzip your jacket, take off the ninja mask and your hat. This isn’t a step, just a good idea so you don’t get too sweaty.

This is when the storm really started to pick up and my super high-tech spy camera might have gotten snowy so I didn’t get any pictures making the blocks, but basically you’ll want to fill your box with snow, pack it tight, let it sit a moment, dump out the newly formed snow block, and carry it (lifting with your legs), to your foundation. This is called “block one”. Some engineers call this the “cornerstone”, but igloos are round so… this is just “block one.” Before your carry block 2 through 40 to the foundation, trim off the corner of each block with the yard stick so it sort of lines up with the block to its right. (See Fig 1) 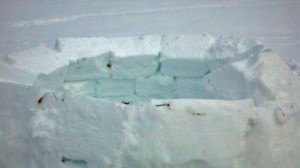 check out that angle

Just before you reach the snow ramp, you’ll want to make sure that the top of your first row of blocks is angled very slightly inward. Shave the top inner edge with your yard stick so that the whole 1st layer is flush and at the same angle.

Around row three the blizzard let up for a moment. Not only did it allow me to finally see what I had been building while snowblind, but it also allowed me to “snap” this picture. It was worth it though it cost me a finger as the extreme temperature immediately froze it off. In retrospect, that’s probably what caused the snapping sound since my spy camera doesn’t make any noise. 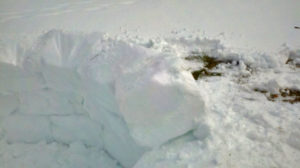 Every row you climb make the inward angle more and more extreme. If you have doubts about the block staying in place just hold it there firmly for a moment until the snow block settles and freezes.

This takes a fair amount of guess-work depending on the size of your block mold. On one end of the spectrum you don’t want to build higher than you can stack blocks (I did that with this one), and on the other you don’t want the whole wall to collapse inward.

Until finally you’ve only got a round hole that a block won’t quite fit in. I like to make two half high blocks and put them next to each other, then throw a few scoops of snow on top.

Find south, downhill, or the direction the wind isn’t blowing and dig a hole through your beautiful snow dome.

This igloo took me 3.5 hours to build on a warmish (40’s) day, alone. It has been years since I spent a good long snowday being out in the elements and it would have been easy to keep my nose to the grindstone and work on my novel, or designing the next awesome Wild Earth program, or –let’s be honest– re-watching the Bourne trilogy. But I think there’s an element of survival that often goes unaddressed is our modern world of comfort, and that the conscious choice to live. 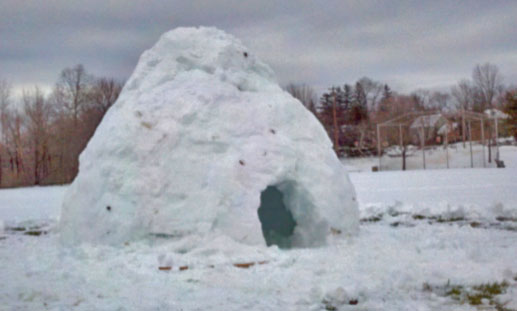 Note: Were you really trying to survive a cold winter night in an igloo (which I have for real done) there are a few alterations I would recommend.

1) The foundation should be 2.5 – 3 feet of solid snow, and the door tunnel should be dug (at the end) through this solid layer and up into the igloo above. This hole in the floor of your igloo creates a cold sink. As your body heats up the inside and hot air rises, cold air will be forced down the tunnel.

2) The inside of the shelter will get warm. I slept in a 12′ igloo with three other people on a sub zero night and it got up to above 40 inside. The problem with this is that the snow will melt and as soon as it finds a low point in the ceiling it’ll drip off. On you. Then you’ll be wet. The solution is to make the interior as smooth a dome as you possibly can so that the water chooses to run down the sides.

The rest is basically the same as above. Happy building!

Wild Earth, Staff & Board of Directors

Wild Earth joins inspired leaders in offering multi-generational programs and events that strengthen connections with ourselves, others, and the Earth while building ecological, social and cultural resilience. Located along the Shawangunk Ridge in New York’s Hudson Valley, Wild Earth is a not-for-profit that runs nature-based programs for children, teens, families and adults. More about Wild's work.

6 thoughts on “How to build an Igloo, survive a blizzard, finish your mission on time”