More than 400 campers came to Wild Earth this summer 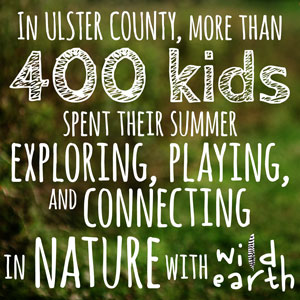 In 13 years of offering Wild Earth, nobody has ever been turned away for lack of funds. This summer, our organization gave away more than $40,000 in summer camp financial aid and discounts.

From foster care children to NYC weekenders, families from all walks of life were able to participate in Wild Earth’s incredible camps.

It was an incredible summer:

Finally, a big shout out to Simon Abramson and Mai McNamara, who did a stellar job co-directing the Wild Earth Summer Camp this year!

Check out these videos created at this year and last year’s Wild Earth Art Camp!
(Big thanks to Laura deNey of Flicker Filmworks for making the videos possible.)

PS: Have you seen Maggie Heinzel-Neel’s photos of this year’s camps? Check out the full collection and order your own prints from Maggie.

In 2004, David co-founded and, today, is the Executive Director of Wild Earth, where he seeks to help regenerate healthy community culture and create opportunities for people to connect with themselves, each other and the Earth. Prior to founding Wild Earth, David worked as a wealth advisor on Wall Street for twelve years before realizing a life dream – fully sharing in the care and parenting of his three children, and creating a small family farm. Today, the Brownsteins raise dairy cows, goats, chickens, bees and vegetables in season. David also maintains an active counseling practice called Root Connections, where he focuses on helping individuals, couples, groups and business leaders identify and manifest their unique vision. More about David's work.