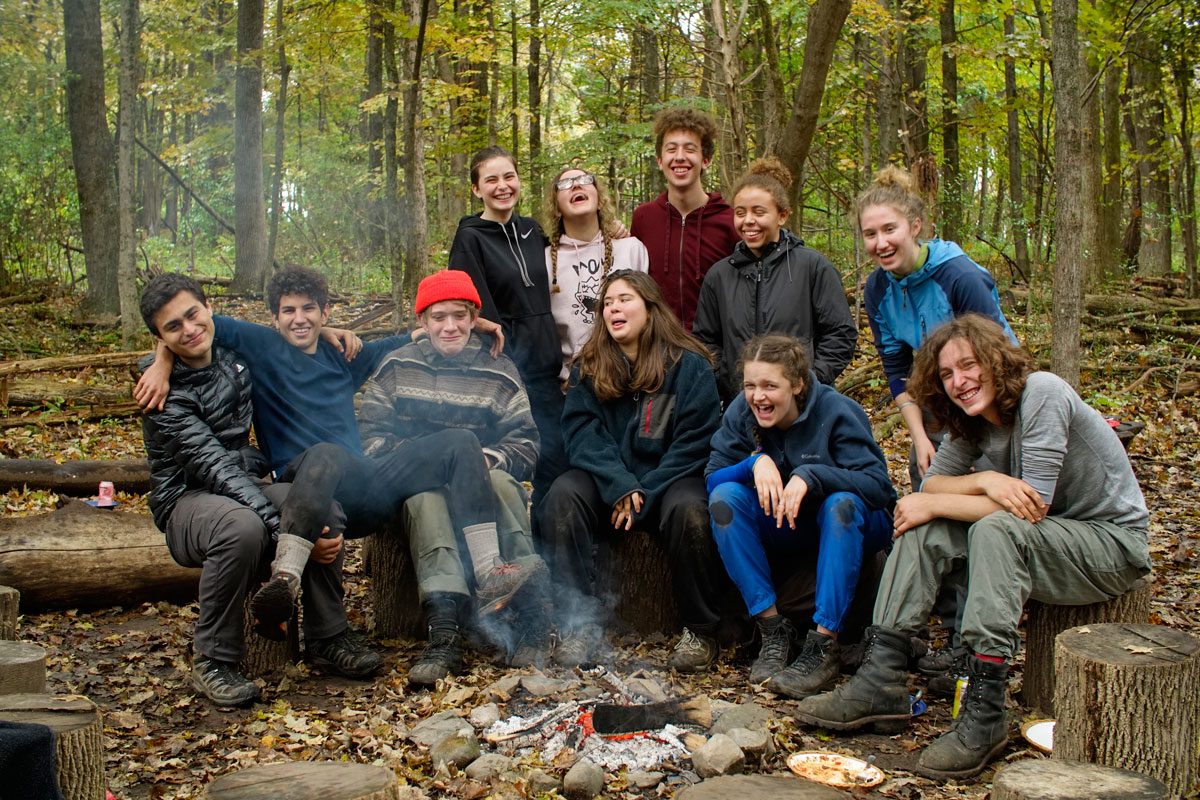 Earlier this October, twelve teens ventured into the wildness for a four day and three night rite of passage. This was the culmination of 8-months of preparation for the teens and their parents.

Unbeknownst to them, the teens had been preparing for this experience for years through Wild Earth’s weekend and summer programs.

Building fires, setting up tarp shelters, sleeping out in the dark, and waking up in the night to take a shift tending fire — Wild Earth’s day and overnight experiences are created to foster the confidence, perseverance and skills necessary to tend a fire alone in the wilderness for 24-hours.

When teens rise to become young adults inhabiting their unique gifts — witnessed and honored by their community in rites of passage — the village becomes whole.

Designed to connect the teens with their inner wisdom as they transition toward adulthood, Wild Earth invited 8th, 9th, 10th, 11th and 12th grade teens who were enrolled in our year-round programming to opt into a community held rite of passage.

In the eight months leading up to the rite of passage, the teens met several times with Wild Earth leaders and mentors to talk openly.

While the teens talked outside around the fire, our staff sat indoors with the teens’ parents to discuss and process the changes they were seeing in the teens, how it felt for them as parents, and to identify supportive ways parents could step forward and ways that they could step back in service to the teens.

In these discussions it became clear that parents cannot be the ones to initiate their own children: it takes a village.

On their second morning waking up together in the forest, the teens silently ventured out to their solo sites.

Each teen carried a still burning coal from the group’s central fire, a ceremonial fire which the group had lit together the previous night.

The teens were asked to nurture the coal into a fire which they would keep burning for 24 hours. They were asked to return the next day with a still burning coal from that same fire.

The teens returned 24-hours later rich with hard-earned confidence, depth, wisdom, and a connection to the indescribable.

“I had fallen out of love with myself.

I hadn’t been able to cry in years. I would cover my emotions up and pretend like I was fine.

I fell back into love with myself through this experience.

This was the first time that I cried from something other than physical pain.”

Teen from 2018 Rite of Passage

“Time slows down and takes on a new dimension.

They get to be with themselves.

I’ve never seen any teen able to access their heart and their truth like they can when they’re in a rite of passage. That’s what I feel like is going to help change the world.

These 12 teens are changed forever.”

“They gave up time with their friends, attending sports tournaments, playing music, time just being an average teen.

They put that all on hold for this.

And they sacrificed their comforts; they left the warmth and security of home for the unknown.

Seeing their growth throughout this experience, that’s a gift. As I see them change, I change. And that shapes who I am and gives me pride.”

“I was sitting next to two trees and the way the trees were facing one another, they were showing their most beautiful sides. On their other sides the trees were dead and scraggly, yet they weren’t hiding that from anyone. They wore it just as readily as their beauty. But humans, we only show one another our good sides.”

Teen from 2018 Rite of Passage

As a child Simon spent countless hours exploring the forest, streams and wetlands of his neighborhood in NJ. Simon has a B.S. in Environmental Studies from the University of Vermont where he focused on the relationship between a healthy human psyche and a vibrant natural world. He has staffed and studied with various wilderness schools throughout the Northeast including the Institute for Natural Learning, White Pine Programs and the Vermont Wilderness School. When he’s not in the woods, Simon is designing and building websites and other internet solutions. More about Simon's work.