Sitting down with the Ropes staff a couple weeks ago to brainstorm and plan what our January two-night overnight would look like, it became abundantly clear to all of us that because we have such an incredible group of teens this year, that we had to swing for the fences!

We fired ideas across the table such as cooking challenges, archery, epic games, which all sounded great. But then, I asked the question, “ok, but what do we want to do Friday night?” (That’s the first night the teens arrive.)

I looked around the table and noticed a sly look on Ryan’s face. With a coyote like grin he said, two words….Drum Stalk. For those of you unfamiliar, a drum stalk is an activity we run at Wild Earth that is usually reserved only for extra special program moments.

Blindfolded & Walking Towards The Sound of A Far Off Drum

The Drum Stalk consists of all participants lining up in the woods, usually at the bottom of a hill, roughly 10 yards apart and all facing the same direction. They are each given a blindfold and instructed to wear it. Taking some time to acclimate to the darkness behind the blindfold, they stand waiting and listening.

After what seems like a long time in total silence, the distant sound of a drum far off in the woods begins to beat irregularly. In the blindfolded darkness, participants are told to navigate their way to the sound of the beating drum, hands outstretched in front of themselves like a hoard of zombies, stumbling over logs, getting scratched by branches, and perhaps most importantly, stopping and waiting for the next drum beat before moving towards the sound again.

After what is often a long and arduous journey, the participants arrive at the drum and an instructor helps them to sit down in a circle as they wait (still blindfolded) for their fellow participants to arrive. Once they all have arrived, the instructor asks them to remove their blindfolds and asks a series of questions about the experience they just had, but more about that later, and back to the story…

Upon hearing Ryan’s suggestion, our staff locked eyes, hesitated a moment, and proclaimed, “a drum stalk sounds like an awesome idea.”

We knew it was risky to keep the teens up so late on the first night of a two-night winter overnight with such an edgy experience like a drum stalk, but felt confident this was the right group of teens to go for it!

Before we adjourned our meeting, we decided that for this overnight, the teens would be doing most, if not all, of their camp set-up, cooking, and cleaning… and so begins the journey of Ropes 2019 two-night winter overnight. 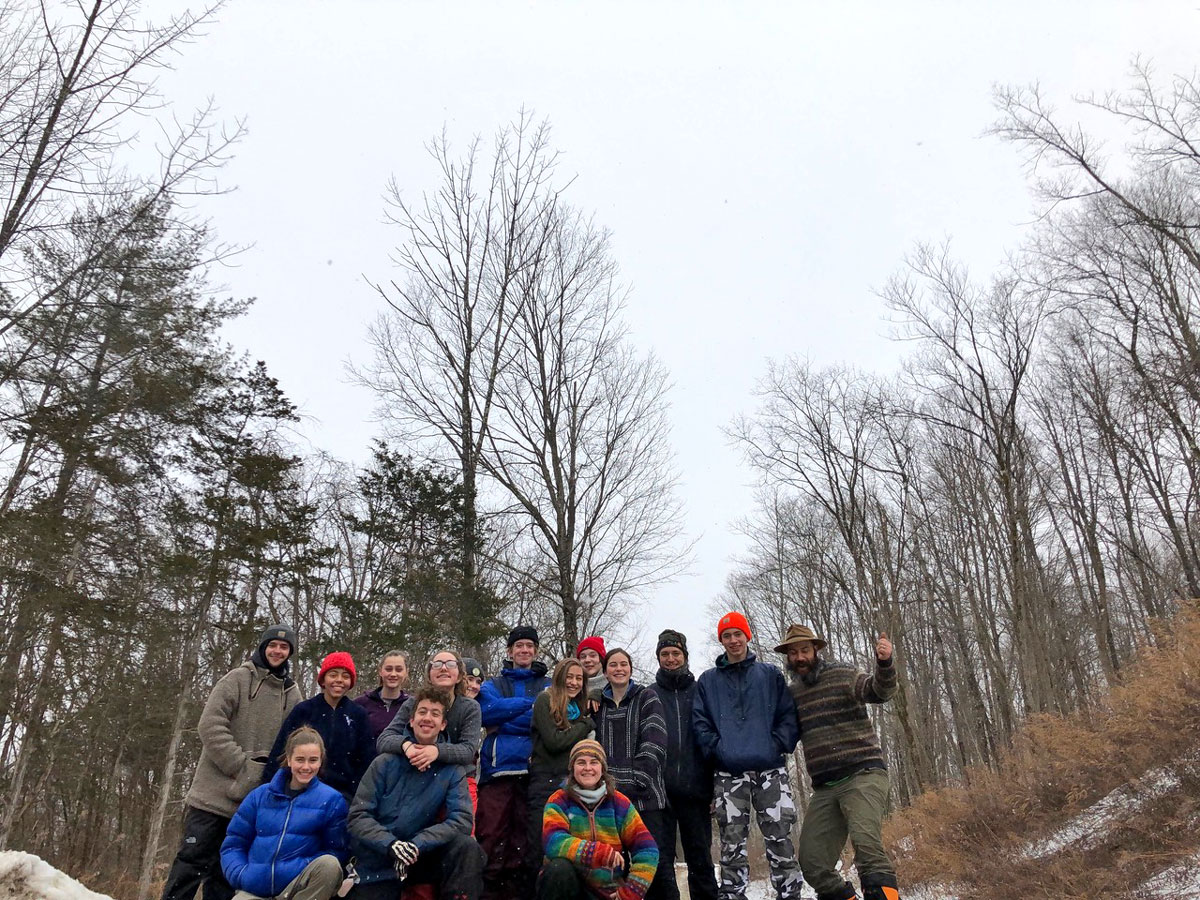 At around 5:30pm on Friday, the teens arrived and were all prepared with the right equipment, experience, and the proper attitude to face the challenge of sleeping outside in the winter without tents. This was evident with how comfortable (almost eager) the teens were when we revealed our plan to hold a Drum Stalk that night.

As we sat around the Drum Stalk fire afterwards, and one of our most experienced visiting instructors, Jonathan, asked the teens about how they each navigated through the darkness blindfolded and whether there were any similarities with how they move and navigate through their own lives. Their answers were personal, thoughtful and unique. We look forward to hearing how the teens will answer the beat of the drum in their daily lives.

Saturday, the teens had a slow and easy morning after staying up so late the night prior. They cooked us all breakfast and the day got a tiny bit warmer (the temperature hardly reached thirty degrees that day). After breakfast to get things moving, they played a running game in and around the field which involved the communication systems of honey bees, particularly the “waggle dance” showing the precise location of the flowers with the most nectar. The teens really enjoy running and playing games, especially those with the elements of role play. 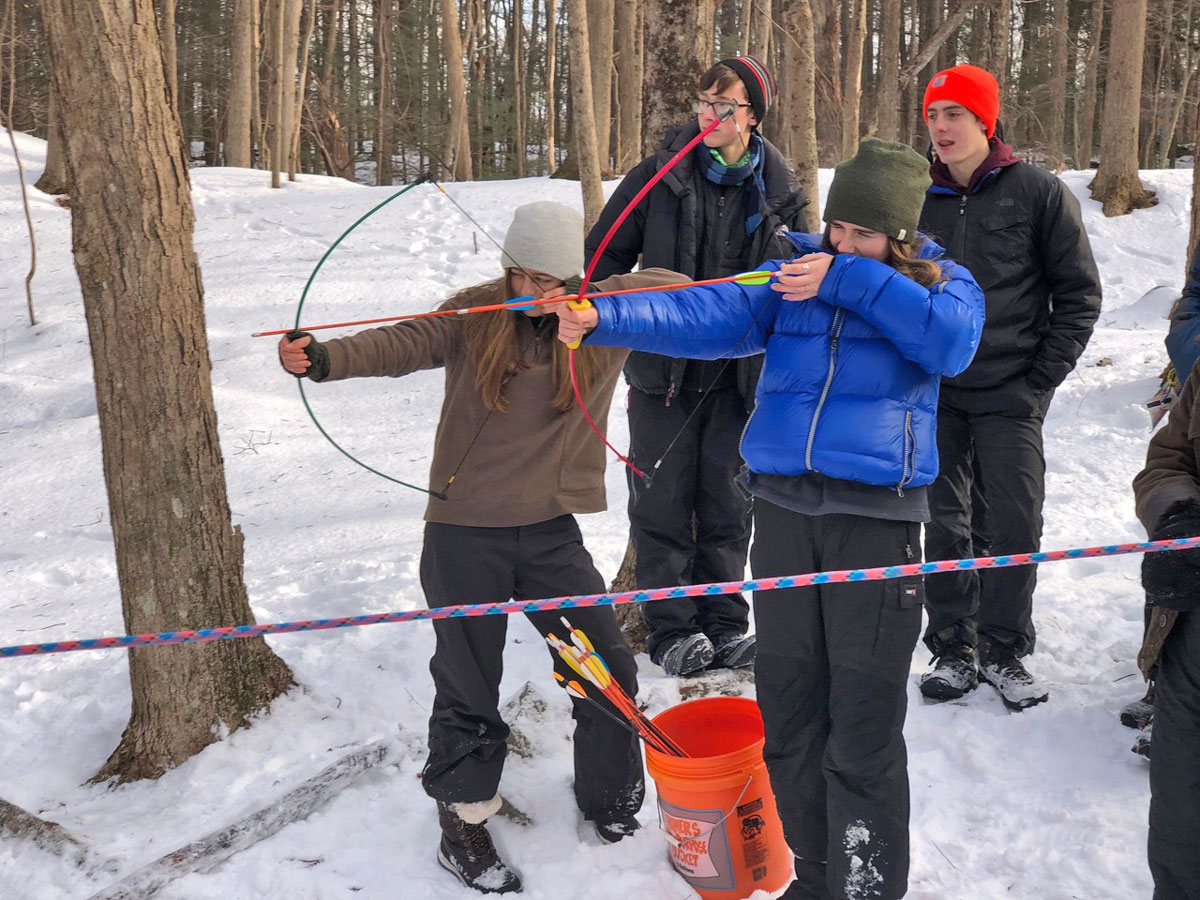 That afternoon we had a visit from long time Wild Earth camper-turned-instructor Michelle Linneman. She and our program leader, Will, led an archery activity. Will set up an elaborate target range and taught some proper shooting technique and Michelle showed off a long bow that she had made herself out of Hickory.

The teens really loved archery. (We look forward to them working on making their own “quick bows” hand-carved from foraged materials on the land.)

As the day progressed, the cold persisted, and perhaps aided by the lack of sleep from our energetic and late first night, the teens found themselves entering an open, less structured period of time; one for rest, or at least fewer active pursuits.

Holding One Another Accountable To A Higher Standard

We noticed the fourth wall begin to crumble a bit here as thoughts of life outside the forest crept into their conversations, but a hearty bowl of chili reinvigorated us, and brought us around the fire as one. The stories, games, and conversations that Ryan (a former Ropes teen himself) lead, directed us all firmly back to the moment.

Ryan told them of how things were when he was a teen in Ropes and what strategies the group would use if conversation topics got off course or possibly offensive to some. The teens decided if someone said something hurtful (intentionally or otherwise) that the person who felt hurt would say “ouchies.” That would signify to the group that something hurtful was said and they they would either apologize or steer the conversation in a different direction.

The conversations we heard the teens having throughout the remainder of the weekend were more thoughtful, present, and all inclusive. We even overheard them self regulate by saying “ouchies” during a conversation they were having on Sunday morning.

Enjoying Sweets & Making The Best Out Of What You’ve Got

Saturday night, the instructors offered a special dessert cooking challenge. We laid out a bunch of different food items: graham crackers, granola bars, apples, marshmallows, bananas, shredded coconut, and a few other items. The teens divided into two groups each with their own cooking fires, and they competed in making the best tasting (and best looking) desserts. The instructors had the pleasure of serving as the tasting panel. It was hilarious and delicious. The teens loved using their creativity, and as always, loved the sweets.

Heading Home That Much Clearer, Stronger, and More Confident

When Sunday finally came around, there was a lot of packing up to do before parents came for pick up at 11am. After we enjoyed an expertly prepared breakfast, we closed camp and gathered for our closing ceremony. Mother nature gave us a sweet farewell with a gentle snow globe scene, as we walked to greet your families.

We were so impressed at their endurance as they took down camp after of long weekend of hard work cooking their own meals, cleaning up, playing games, and sleeping out in quite cold weather.

We could see the change in them over the weekend and know that by rising to all the challenges we put before them that they came out of the weekend at least a little stronger and a little more confident.

There is so much power in them taking care of themselves. In our closing circle, they shared that they are looking forward to coming back to Ropes because it’s a place where it’s easy to talk to each other. They all have common ground in this special thing they do together in the woods once a month. It’s a place to be themselves, get away from the pressures of school, and to live in the moment enveloped in the peaceful care of Nature.

In gratitude,
Dustin and the Ropes Crew 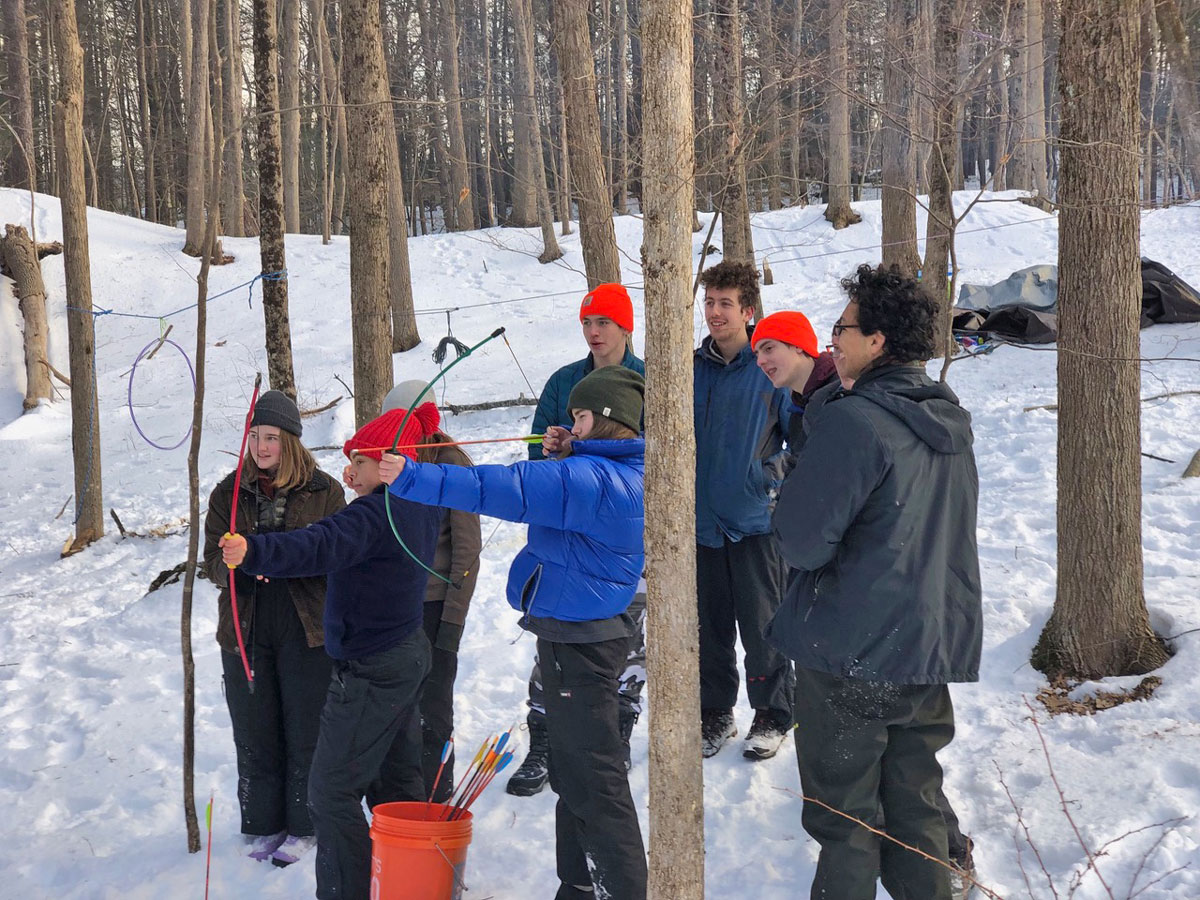 Dustin began his wilderness journey playing with his sister and other neighborhood kids in the “woods” (an acre of marshy land deemed too wet for development) near his suburban Long Island childhood home. After focusing his studies on political science, and philosophy at SUNY New Paltz, he began to take in interest in local food and ecology while working at local farms and wineries. In Fall, 2011 he was introduced to Wild Earth by his friend Thomas Meli, and began attending the Dawn Song Village Program. He has since worked at Kestrel Camp. Dustin has also staffed programs for White Pine Programs in Maine and Coyote Club Wildlife Education Programs in New Hampshire. He has a passion for bird language, harvesting edible plants, and sharing stories of deep nature connection. He received a permaculture design certification through Green Phoenix Permaculture and has been to two New England Bird Language Intensives with White Pine Programs, as an attendant and staff facilitator. More about Dustin's work.