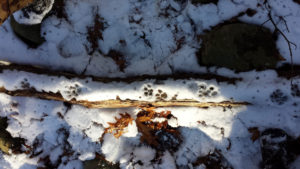 The sun was below the horizon and dropping almost as fast as the temperature. Every few minutes another set of headlights would wash over us and another excited teen would climb out of their car, pledge that they had brought enough gear, and add their overstuffed backpack to the pile.

I don’t think it’s an accident that our ancestors designed rites of passage that were not just challenging, not only difficult, but dangerous. From what I gather there was often a very real chance that teens would die in the process.

The instructors arrived 45 minutes early to go over the plan for the 2-nights, and to unite by sharing what we were feeling grateful for and what our intentions were for the week.

I was feeling grateful for my teachers who had taken me out camping in sub-zero temperatures, who had shown me that it was not only possible, but fun. Well… “Fun” might not be the right word. Heroic seems a better fit.

I believe, because I feel it and see it, that the human spirit craves challenge. For all of our human existence there has been a baseline level of challenge required to live.

A hundred years ago pioneers subsisted during the winter on trapped, hunted, and stored food. Something that would be nigh impossible using our modern talents, but for them it was only difficult compared to living in the summer. No, challenging and difficult don’t quite get at it.

Difficult is good hard work, but ‘difficult’ fails to ignite the heroic spirit. I don’t think it’s an accident that our ancestors designed rites of passage that were not just challenging, not only difficult, but dangerous. From what I gather there was often a very real chance that teens would die in the process. Sounds alarming, but one could say the same thing of childbirth in the same era, and thank goodness our ancestors didn’t avoid that out of fear. 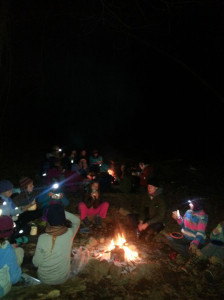 Rites of passage had to be dangerous to focus the tornado that is the teenage heroic spirit, because without it (and sometimes even with it) that undirected tornado would sweep over to the neighboring tribe, steal their horses, and clumsily start a war. I don’t think we’re short on examples of how today’s unchallenged teens are trying appease that heroic energy by doing things that are considered dangerous and stupid. For the hero and heroine the goal is not simply to survive; the goal is to live big. The question is: what good is your long life if you spent it in a sterile cage? I certainly remember how black and white things seemed when I was a teen.

One of the things that gives my life the most meaning is the opportunity to create “dangerous” experiences that challenge the human spirit. I use that word in quotes because it’s the perception of danger that is important. As soon as your body thinks it may be in trouble the cortisol does the rest. (By the way, cortisol is converted from cholesterol –anyone want to try my new fad weight-loss program?)

So if anyone asks why we were running around the dark woods while the temperature plummeted into the single digits, pretending we were on opposite teams trying to capture each other’s flags and score “points” that we logically knew didn’t matter, all we can say is, “Because it was fun!”

But the real answer is: because we needed to remember that we are alive. Alive and enormous.

Tyler has been leading groups outdoors since 1999, from whitewater kayakers at Zoar Outdoor to snowboarders at Berkshire East to human ecology students at Greenfield Community College. Since completing Vermont Wilderness School’s two-year apprenticeship in 2005, Tyler has led wilderness programs for children ages 6-17 in Vermont, Massachusetts, New York and Ontario. He has directed teams of staff for programs with 40+ participants since 2007. Tyler is certified in Wilderness First Aid and CPR through SOLO Wilderness Emergency Medicine. Currently, he works as Programs Director for Wild Earth and is finishing his first novel. More about Tyler's work.